According to the accompanying booklet, the intention of this exhibition at the Tate Gallery in Liverpool is to take a fresh look at Chagall and explore the development of his unique style. The exhibition does this very well and I came away with a good understanding of his artistic journey from his Hasidic Jewish upbringing in his native Russia, through to his later career carried out in the South of France where he finally settled.

The exhibition focuses on the work he did in the years from 1910 through to 1922 with just six works from the later years. Much of the early work is clearly rooted in his Jewish upbringing with emphasis on family and ritual. It is interesting to see how his poetic imagination gradually develops and how he becomes inspired by his move first to St Petersburg and then to Paris, which for him came to represent ‘light, colour, freedom, the sun, the joy of living’.

In recent times his work has been criticised for being whimsical and for it’s popularity in the greetings card market. This exhibition attempts to dispel this view by showing the darker and deeper side of his work. It demonstrates well how he drew on the political developments going on around him, especially in the early years of his career. However, I couldn’t help comparing his painting ‘War’ 1964-66 with that of Picasso’s much more powerful ‘Guernica’. It wouldn’t have stirred up any anti-war protest I think.

I must admit that I find the sad-eyed cows hard to take, but the overall impression that I came away with was of someone who wanted to communicate the sheer joy of being alive. So, altogether an uplifting experience and for me, worth making the journey to Liverpool.

My personal favourite painting from the show is ‘Paris Through the Window’ 1913.

The exhibition runs until 6th October 2013. 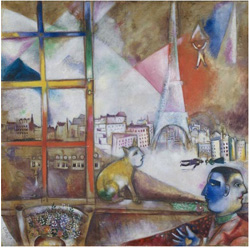