A change of subject and medium for my next project. This piece is going into an exhibition of KAOS artists work at the Kingston Museum in early December. Each artwork will be something to do with Kingston upon Thames and will use stone as a base.

My concept involves the history of Kingston and it’s symbolic location. Kingston lay on the boundary between the ancient kingdoms of Wessex and Mercia until in the early tenth century King AEthelstan was crowned there and united both to create the kingdom of England. Two more kings were crowned in Kingston in the tenth century – Eadred and AEthelred. The original coronation stone is still in the town in the grounds of the guildhall.

So my three stones represent AEthelstan, Eadred and AEthelred and the images are inspired by ancient illustrations of these kings. 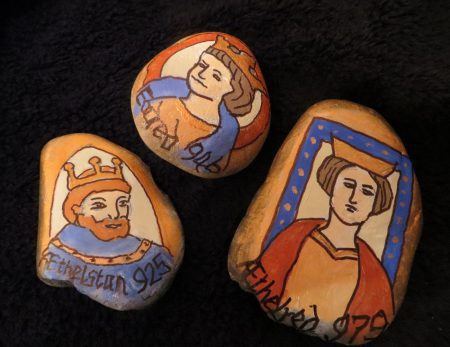